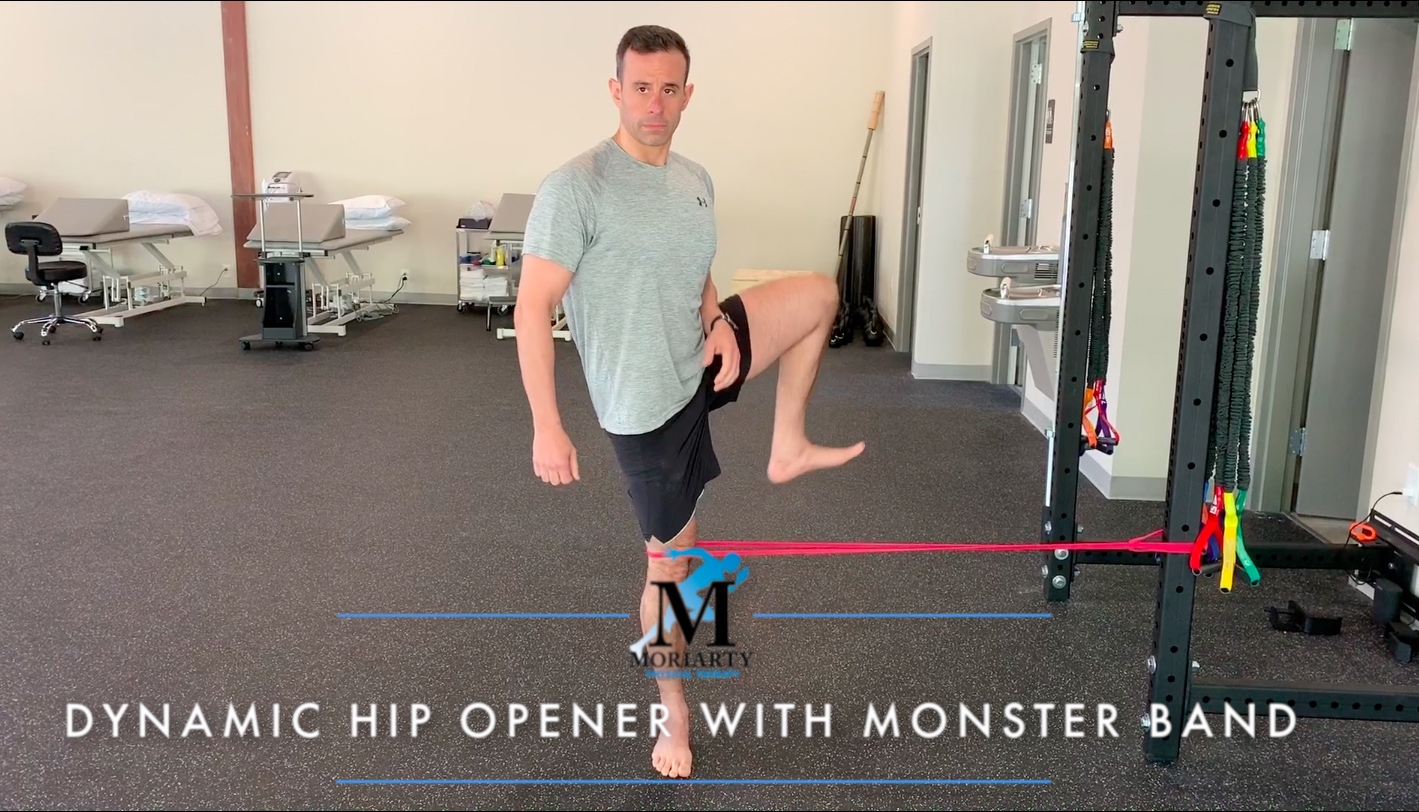 The Dynamic Hip Opener with Monster Band can address limitations in both lower extremities.  This particular exercise is a perfect way of incorporating a stability movement of one lower extremity while performing a mobility movement of the opposite limb.  Athletes and non-athletes alike can benefit from this movement to improve single leg-balance while also improving overall hip range of motion.

When you break down this exercise to all of its moving parts (and there are many), you will see that there is a stabilization element in one leg while performing the hip opener on the opposite leg.  The standing leg must focus on activation of the entire posterior chain including, but not limited to the gluteal muscles, hamstrings, gastroc/soleus, and the posterior tibialis of the ankle and foot.   The band that the opposite leg is stepping over has a dual purpose.  This is meant as an obstacle for the limb to step over, but it also is giving tension in a medial direction on the stability leg.  This medial force on the knee will force the stability leg to counter this force to prevent the knee from collapsing inward.  As a response to the medial force, the hip external rotators and the muscles of the lateral hip will contract, generating some “torque” through the limb.

The hip that is performing the “opener” movement over the band has to perform a combination of hip flexion and abduction (up and away from the body), then perform adduction (moving towards the body) as it clears the band.  As it returns to the starting position, the limb is performing the opposite movement and includes extension of the hip.  This movement forces the femur to perform a full arc through the hip capsule, requiring tissue lengthening throughout the hip joint.  Keep in mind, although this hip is performing the “mobility” portion of the exercise, there is a tremendous demand on the muscles of the hip and thigh.  The muscles that flex the hip (iliacus, psoas, rectus femorus) along with those that abduct the hip (gluteus medius, tensor fascia late) and adduct the hip (adductor magnus) are working overtime to perform this controlled movement of the hip.

A Dynamic Exercise for every Population

The Dynamic Hip Opener with Monster Band is great for athletes such as soccer players, basketball players, runners, martial artists, and dancers who depend on single limb strength to perform activities.  This is also a great balance exercise for individuals who have difficulty with negotiating uneven terrain while walking, often times find themselves losing balance, or tripping while outside.  This particular exercise also places a heavy demand on an individuals trunk and core- which needs to demonstrate control while movement is taking place at the hip and pelvis.  Modifications can be made to this exercise for those individuals who have poor balance and require some more stability (support from a DPT or standing pole).  There are also variations to advance the progression of the exercise to increase the demand of the trunk and core. 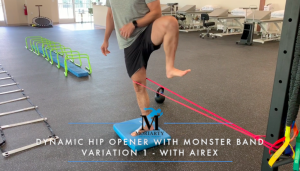 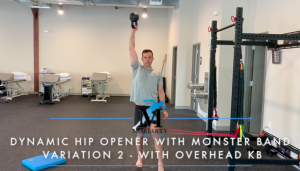