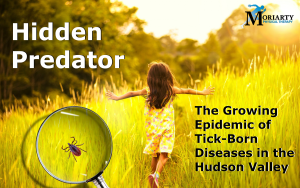 Lyme disease and other Tick-Born diseases have been an ever growing plague in the Hudson Valley region.  The Deer Tick, a hidden predator who stalks our friends and family members in our backyards and parks, has become one of the most dangerous threats to our health.  Lyme disease, like it’s carrier, can lay hidden or mask itself by presenting signs and symptoms that may be similar to other illnesses including fibromyalgia, multiple sclerosis, and chronic fatigue syndrome.  Known as “The Great Imitator,” the presentation of Lyme disease is so variable, it can be very difficult for many healthcare professionals to diagnose.  Knowing and understanding both how the Deer Tick spreads the disease and how Lyme disease may present itself can help both prevent the disease and/or treat the disease in it’s early stages.  The combination of early Medical Management and Physical Therapy Management have been proven to help treat Lyme Disease and the many other associated dysfunctions.

Over the past decade, the reported cases of Lyme disease has increased substantially, with the largest cases noted in the North East.  Dutchess County is one of many counties in the state of New York that continue to see cases of Lyme and other tick-born diseases reported by its residence.

Lyme disease is caused by the bacteria Borrelia which are transmitted primarily by blacklegged or deer ticks.  Deer ticks spend most of their time hiding in wooded or grassy areas to feed on deer and mice.  Walking in grassy areas or in wooded areas in shorts and/or short sleeves increase your risk of being bitten by a tick capable of transmitting Borrelia bacteria.  The risk of acquiring an infection also increases if a tick is allowed to remain attached to the body for more than 48 hours, allowing it to take in a full “blood meal.” If a tick is identified and removed prior to that time, the risk of infection is low.

Deer ticks find food through a behavior known as questing. A questing tick positions itself on a blade of grass, a leaf or other vegetation. It stretches its clawed limbs outward and waits for hosts to pass by. Ticks can’t jump or drop down onto their hosts! Ticks latch onto prey when a host brushes against a questing tick.  The tick latches on and then will feed on the host.

Stage 1 – Localized Presentation.  About 88% of individuals infected by Lyme disease will present with a red skin rash or “bulls-eye” pattern.  This can generally occur within a few days of infection (although may be absent all together and may not be accompanied by other symptoms).  Flu-like symptoms may occur within the first several days as well.  Many times the flu-like symptoms are not accompanied by the “bulls-eye” rash.  The absence and similarity of these symptoms to other conditions may be why the disease is hard to diagnose early.

Stage 2 – Widespread Infection (neurolgical, musculoskeletal, and cardiac findings).  A third of patients develop Lyme-related arthritis, which causes swelling (usually on one limb) of large joints such as the knee.  Patients may also have generalized muscle and/or bone pain that moves over the course of hours or days.  Facial nerve paralysis (Bell’s Palsy) may occur in untreated Lyme as a result of inflammation of the Facial nerve.

Stage 3 –  Chronic Infection  (long-term neurological symptoms, arthritis, and cognitive deficits).  4 to 10% of patients present with cardiac signs and symptoms including increased or slow heart rate, or arrhythmia.   Many other may report shortness of breath and dizziness.  Radiating nerve pain may also be associated with chronic Lyme infection.  There are some studies that argue that other medical diagnosis including Fibromyalgia and Chronic Fatigue Syndrome may be the result of untreated Lyme Disease.

Management for Lyme disease is a combination of medication management and physical therapy management.  Physical therapy is effective in treating muscle weakness, fatigue, and other neurological dysfunctions that may be present as a result of Lyme disease.  The use of electrical stimulation therapy can help treat Bell’s Palsy and strengthen the muscles that are not moving.  Conditioning programs can help increase strength and endurance for those individuals who demonstrate signs and symptoms of Chronic Fatigue Syndrome.

If you’re going into an area that’s likely to be infested with ticks, there are several simple steps you can take to reduce your chances of being bitten:

For more information on how to prevent Lyme Disease, visit the Center for Disease Control and Prevention website here.